“I am honored to be named to the 2017 class of the IBJ’s Forty Under 40,” Meyer said. “I am privileged to be engaged in rewarding community development work every day. It is especially satisfying to see our neighborhoods revitalizing and the quality of life of residents improving. Without question, none of the positive impact we are making in the community would be possible without our talented staff and supportive board members.”

Criteria for selection included the level of success a nominee has achieved in his or her chosen field, their accomplishments in the community, and the likelihood the nominee will stay in Indianapolis and build on those achievements. The committee tries to include individuals from many fields of endeavor. Every effort is made to ensure deserving candidates are considered across gender and race. However, final selections are based solely on a person’s accomplishments.

Steven also added that he is fortunate to have strong partnership and funding relationships, including those with:

“I’m grateful to be able to work with bright and dedicated people every day,” Meyer said. “I am also indebted to those who choose to invest in Indianapolis. We’ve been able to work with numerous terrific businesses that have chosen our neighborhoods – Hotel Tango Whiskey, Longbranch, Cannon Ball Brewing, Festiva, R & B Architects, Reveal Properties, TSV, and more. I look forward to continuing to attract economic opportunities to the neighborhoods.”

The Build Fund has helped Hotel Tango Whiskey expedite its growth into hundreds of restaurants, bars and retail establishments, as well as funded its latest distillery in the Tinker House building at 16th Street and the Monon Trail. “The Build Fund allowed Hotel Tango access to capital otherwise unavailable for a startup, which has expedited our ability to enter new states and markets,” said Travis Barnes, President and CEO of Hotel Tango Whiskey. “Moreover, the Build Fund gives Hotel Tango the means to keep up with our production demands, as well as expand our reach into the events services industry.”

The Build Fund has also helped support Reveal Properties, which is redeveloping several commercial and residential properties in the Kennedy-King neighborhood. “Jason and I are grateful for the opportunity Steven gave our company through the Build Fund,” said Kara Heiser, co-owner of Reveal Properties. “Through the Build Fund program, we have taken huge steps toward bringing the distressed buildings at 17th and Bellefontaine to life, and creating an urban commercial core for the neighbors in Kennedy King. We have restored a part of Indy’s history in these buildings, and attracted new jobs and economic growth at the same time. I’m thrilled that we share similar missions. It’s wonderful to see the Build Fund’s support and confidence!”

To learn more about the Build Fund, please visit www.buildfund.org or email us info@buildfund.org.

King Park Development Corporation is a non-profit community development corporation (CDC) committed to improving housing, economic development, and quality of life in the King Park area. Founded in 1987 by concerned residents and neighborhood groups, King Park has helped drive the revitalization of neighborhoods in the northern downtown area of Indianapolis through various public and private partnerships. | renewindy.org

About the Build Fund

Launched in July of 2015, the Build Fund is a loan fund operated by King Park Development Corporation dedicated to helping businesses and underserved areas grow and create jobs in the Indianapolis area. Certified as a Community Development Financial Institution (CDFI), the Build Fund plays a large role in generating economic growth and opportunity and connecting businesses to flexible, affordable, and responsible funding. | buildfund.org King Park’s small business loan fund, the Build Fund, was featured in a story on TechPoint about strengthening Indy business through… Exclusively Focused on Growing Small Businesses in Indianapolis Indianapolis, IN – The Build Fund, a loan fund operated by King… After being abandoned for years, the former gas station at the corner of 16th Street and Dr. Andrew J. Brown… Grand Opening of The Delaware! Authored by LaMar Holliday I’ve heard a fair share of stories about millennials not buying homes. As a millennial, I… 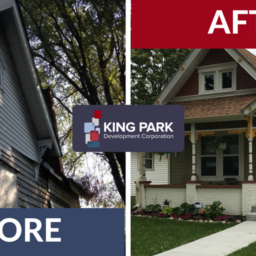 Before & After Story: Dolores Wisdom’s Home on Bellefontaine

Dolores Wisdom was drawn to her home at 2115 Bellefontaine St. despite its deteriorating appearance and walking through boxes of…

On August 10, 2017, an open house was hosted by Renew Indy, the City of Indianapolis, and King Park in celebration… We’re always thrilled when we get a chance to sit down with our homebuyers! Meet Jessica, Asha, and their dog… While many traditional lenders have tightened lending standards and restricted credit access, mission-driven lenders like King Park have continued to expand access to safe and affordable credit. While many traditional lenders have tightened lending standards and restricted credit access, we’re proud, as mission-driven lenders, to expand access to safe and affordable credit for inclusive and diverse housing opportunities through the Edge Fund. The Edge Fund, owned and operated by King Park, is focused on offering flexible financial products that will create diverse and inclusive affordable housing opportunities across the housing spectrum in Indianapolis.